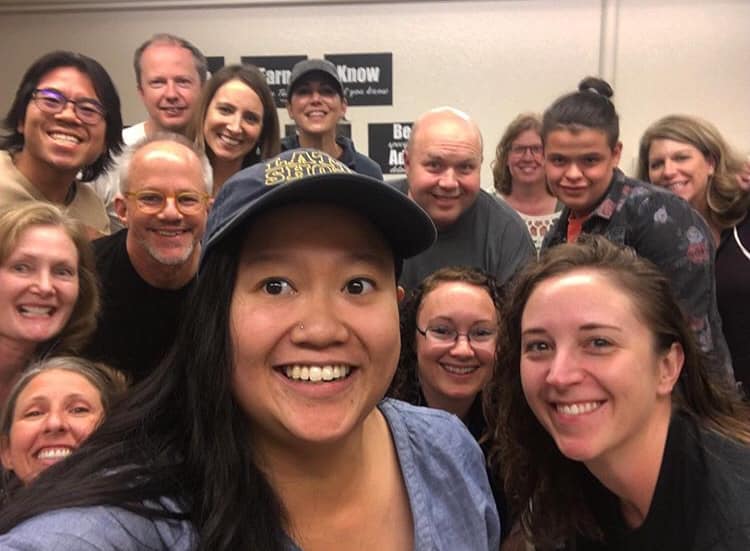 These are commonly used terms at Sacramento Comedy Spot, used in our core improv classes. Want to play some fun improv games? Visit our Improv Warm-up Games List. Please let us know what other terms you would like us to add.

A-to-C Connections (Word Association): We use word association, or A to C, to inspire a true story from a suggestion, and/or find a variety of subjects to tell stories about during an improv show.

If you are trying to come up with a true story from your past based on a suggestion from the audience, then you would follow this process:
If you get “balloons” as a suggestion, in your head, you could say to yourself, “Balloons remind me of hot air balloons, which reminds me of a romantic date.”

In this example, Balloons are A, hot air balloon is B, and romantic date is C. You were able to A-to-C away from the initial suggestion.

You can also use word association, or A to C, to find a new subject for a true story. If you tell a story about how you used to skateboard as kid, then you could say to yourself, “Skateboarding reminds me of danger, danger reminds me of stunts, stunts remind me of movies.”
That might trigger a memory of the first time you kissed in a movie theater, which is a totally different subject than skateboarding. We want to have a lot of different subjects for true stories so we have more idea choices for scenes.

Act Outs:  Act outs usually show something that that the original scene is just referring to. One or more players enter the stage to show an act out and, most of the time, they will leave the stage and the original scene will continue. Example: “My parents were so sad to see me go.”  Two players step forward from the backline in a different part of the scene, and one player might say, “Well honey, our youngest is off to college. Let’s celebrate!”

Backline: Performers in a show standing near the back wall of the stage when they are not currently in an improv scene.

Bad Doctor Scene: A scene where a performer plays a doctor that is just… bad: ripping out body parts, not knowing how to perform a surgery. It is hard for the audience to suspend their disbelief with these types of scenes that stay at crazy town without any elements that ground the character.

Scene Blending: Two or more scenes blending their patterns together into one scene. Scenes have to blend naturally and usually have similar patterns, characters, locations, or themes in common. The blend has to be natural. Do not force a blend. Play pattern, not plot.

Character: Characters are original, fictional people you create that are defined by one simple, unusual trait (pattern). That trait can be a want, motivation, focus, desire, or gimmick.

Cut To: When a player on the back line, not engaged in a scene, wants to move the action of the scene to a different time or place. This is usually done so the players in the scene can show and perform their pattern in present time instead of talking about it. Example: A scene starts with two players talking at home about how they are going to react to seeing people at prom. Someone on the back line yells out, “Cut to them at prom!” and then the scene continues in this new place and time. This is a powerful tool; use it responsibly.

Crazy Town: Crazy town is the most heightened level at which a scene can be played (the most unusual). It’s the goal of each scene. At the beginning of a scene, the pattern is played more grounded but heightens each time the pattern is hit. The scene ends when it gets to crazy town.

Don’t Try to be Funny: In improv, the thing the audience laughs at is actually a byproduct of following certain improv “rules”. Examples are “Yes, and”, having one focus, and heightening that focus, instead of going for a joke that may not support an improv scene or game.

Familiar Relationships: Characters in improv scenes should try to know each other. If characters have familiar relationships, they have past experiences that can be used in the scene. If characters are strangers, then they are more likely to have conflict or ask questions, which prevents the scene from moving forward and hitting on the pattern.

Grounded: Playing closer to reality. Scenes and characters are grounded when they are more believable to the audience. Most scenes start off more grounded and heighten with each hit until a scene gets to crazy town (most unusual).

Group Scenes: A scene in which the same pattern is played by multiple people. All of the characters in the scene exist in one unusual world and hit the pattern from the same unusual perspective.

Edit: To run in front of an improv scene when it has reached crazy town, or when the players have attempted to get to crazy town.

Heightening: Most scenes start more believable and end at crazy town (most unusual). Players earn crazy town by hitting a pattern (returning to the funny of scene). Each time players hit the pattern, it has to have more impact or be more unusual (more heightened) than the last hit on the pattern.

Helix: The Helix is a long-form improv structure in three beats, featuring characters, physicality, and strong improvised scene work.The Helix provides structure but also allows for open creative play, so it is good for performers who are still developing skills, and it is accessible for audiences. Helix was created at Sacramento Comedy Spot.

In the Sauce: Performing a scene in the present and showing hits on the pattern instead of talking about in the past or present. Be in the sauce. Don’t talk about the ingredients.

Inventory: Words and information added to a scene. Use your scene partner’s words, and the information they are providing, to agree with them.

Short-Form Improv: A style of improv in which performers play improvised games instead of scenes. Some short-form improv games are scene-based but still have a game that the performers are focused on.

Long-Form Improv: A style of improv where performers create scenes without any preparation or planning.

Montage Form: a long-form show that is a collection of scenes without any real structure.

Noel: Something a performer does subconsciously when they are performing improv. They are a subconscious tick, like shuffling feet, touching your head, tapping your hips, etc.

Organic Scenes: An improv scene where players are initiating without a pattern. Players are responsible for finding, labeling, and playing a pattern from grounded to crazy town.

Runs: A series of 2 or more tap outs that occur back to back. This usually occurs when the unusual character has such a strong pattern that it can be played in many situations.

Split Scenes: Two or more improv scenes taking place at the same time, in different areas of the stage. These scenes take place in separate locations and/or times, but in the same world.

Warm-up game: An improv game used at the beginning of a class or before a show to prepare the students or cast members for performance.

Yes, and…: The concept of agreeing with the focus of a scene and adding new information and details that support that one focus.