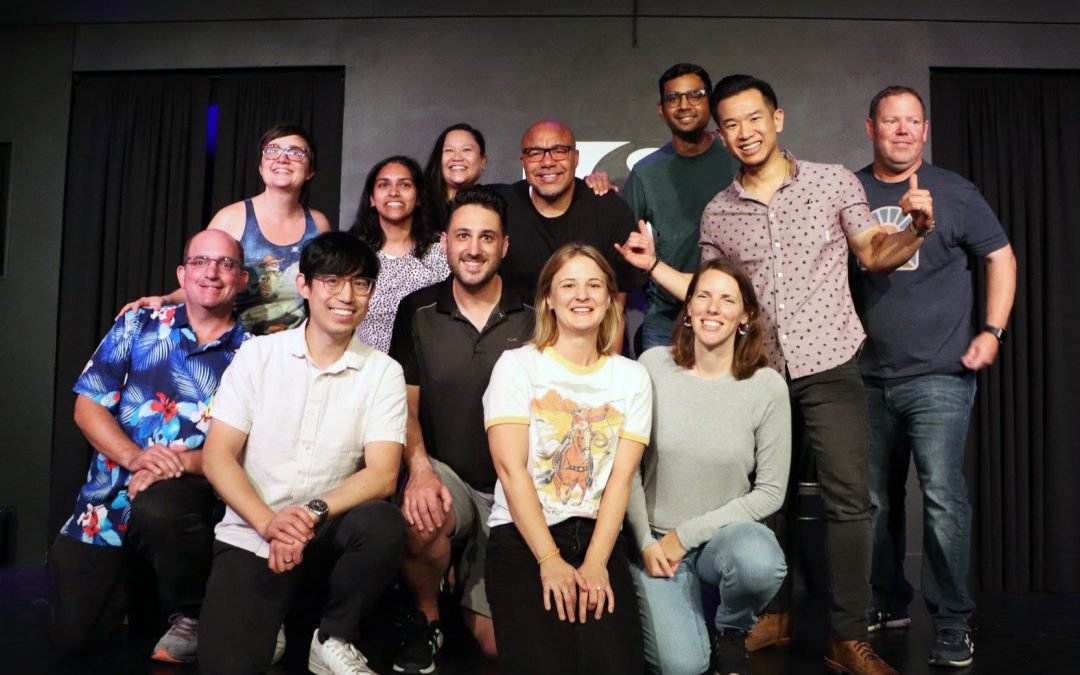 This is a list of improv warm-up games played at Sacramento Comedy Spot in our core improv classes. If you see some terms you don’t know, take a look at our Improv Glossary. What other games should we include?

10 SECONDS TO MAKE A…
Divide the class into groups of 4-5.
Groups have 10 seconds to create different objects with their bodies. The group members’ bodies become the object.
Groups should communicate and work together. Agree!
Students should say, “I am going to be the [blank]” instead of telling other students what to do. No directors.
Listen: Speak one at a time. Allow everyone to be creative and to be heard.
Keep it simple. It doesn’t have to be funny.
List of Possible Objects:
Tree • Couch • Sunglasses • Car • Airplane • Strand of DNA • Zipper • Pirate Ship • Dragon • Vending Machine • Plate of Sushi • Helmet • Swing Set • Refrigerator • Castle • School Bus

ALPHABET RACE
Split the class into smaller groups of  4-5 (larger if needed).
The first student points at another and says, “A.”
That next student points at another student and says, “B.”
Students keep passing the alphabet around the circle until they get to Z.
The first group get to “Z” wins, and should raise their hands over their heads and yell, “Yay!”
Note: Do not point in a circle or pattern. Point at random. Make eye contact. Focus.

BUNNY BUNNY
Everyone stands in a circle. There are three levels of activity happening in this warm up.

Variation
Everyone is silent. Just eye contact and gestures.

Everyone stands in a circle. One student picks a category (example: shoes).

Ask a student to pick a new category (example: cars) and repeat the above.

CRAZY EIGHTS
Everyone stands in a circle and counts loudly to eight while shaking their right hand, then counting to eight with left hand, then right leg, then left leg, all while making eye contact with everyone in the circle.
Start the pattern again with the right hand and count to seven. Repeat with lower numbers until reaching 1-1-1-1.
Variation: Have each student use a different voice for each number that everyone else mimics. Students should also mimic any variation in the way students are moving. Example: Brad: Western Voice: 3-2-1 Saba: British Accent 2-1

ENERGY CIRCLE
Everyone stands in a circle.

FIVE THINGS
Everyone stands in a circle. Taking turns, have students list 5 things in the category of a location.
Example: First student to another: “Brian – 5 things you would find at the state fair.”

HERD OF SQUIRRELS
Whole class spreads out in the room.  One student says, “Look out, here comes a herd of squirrels.  The whole class becomes squirrels.  Once everyone has become a squirrel. Then another class members says, “Look out, here comes a her of [blank]”  Repeat
Reminder to the class:  Commit.  You can be any animal, real or mythological.

HOT SPOT
In a circle.  Instructor will give the class a one word suggestion.  That suggestion will inspire on student to run in the middle and sing an established song.  Students will take turns tagging out players in the middle and singing new songs.  Each new song should be inspired by the one before.
Everyone should participate.  Hardly anyone can sing.  Support in two ways.  If they know the song, they should sing along, or clap, or dance, or play an instrument.  Students can also support by tagging out the student in the middle after a couple of lines to the song.

KNIVES, BABIES, ANGRY CATS
Class in a circle. We are going to throw Knives, Babies, and Angry Cats from person to person. The goal of this game is to start and end the game with the same number of objects.

LITTLE SALLY WALKER
Students in a circle. One student in the middle.
Start with the instructor in the middle to demonstrate.
Everyone sings Little Sally Walker:

LOOK AND SCREAM
Students in a circle. Start with heads down.

NAME SIGNALS
Students in a circle.

PASS THE CHARACTER
Circle.  First student makes eye contact with another student across the circle and walks toward that student doing a character.  2nd student studies everything the first student is doing/saying and then recreates that character by walking toward another student.  Repeat until crazy town.
Note:  Don’t change the character on purpose.  But follow the changes.

PASS THE NAME
Students in a circle. First have students introduce themselves to the students on their right and left and go around the circle and have everyone share their name with the class.

Have students change places in the circle several times. Each time students switch they should introduce themselves to the students on their right and left.

SPLAT
Everyone in a circle. Instructor in the middle of the circle.

SWORD FIGHT
Students spread out throughout the room.

WHAT ARE YOU DOING?
Starts with 2 students on stage.

ZOMBIE
Entire Class spread out throughout the room.
Choose one student to be a zombie.
When the instructor says “go” , zombies will try to tag students to turn them into zombies.
Students have to transform into a zombie before they can start to go after other humans.
Everyone has to move in slow motion.
Play until everyone is a zombie.
Be respectful of students’ bodies. No tagging in the bathing suit area.
Make sure people do not climb on seats.

ZOOM, SCHWARTZ, PROFIGLIANO
Everyone stands in a circle. This is a game where students pass a “ball” from one player to another.

Like most Improv games, this is also a drinking game.

ZOOMIE ZOOMIE
Students circle up with the Instructor in the middle.
Instructor is Zoomie Zoomie.
Students from left to right, clockwise around the circle, are numbered One One, Two Two, etc.
Zoomie Zoomie starts off by saying, “Zoomie zoomie up the beat zoomie zoomie” and then selects a student  “three three.”
The student who is selected must say their number first and then another student’s number. “Three Three, Five Five”
Tell the students they can select the first person again by saying, “Zoomie Zoomie” but each time you return to Zoomie Zoomie the pace gets a little faster.
When someone “messes up” they have to go to the end of the circle and the Zoomie Zoome starts over again.
Note: remind the class to start off slow and not to raise the pace too fast, or in the middle of a round.