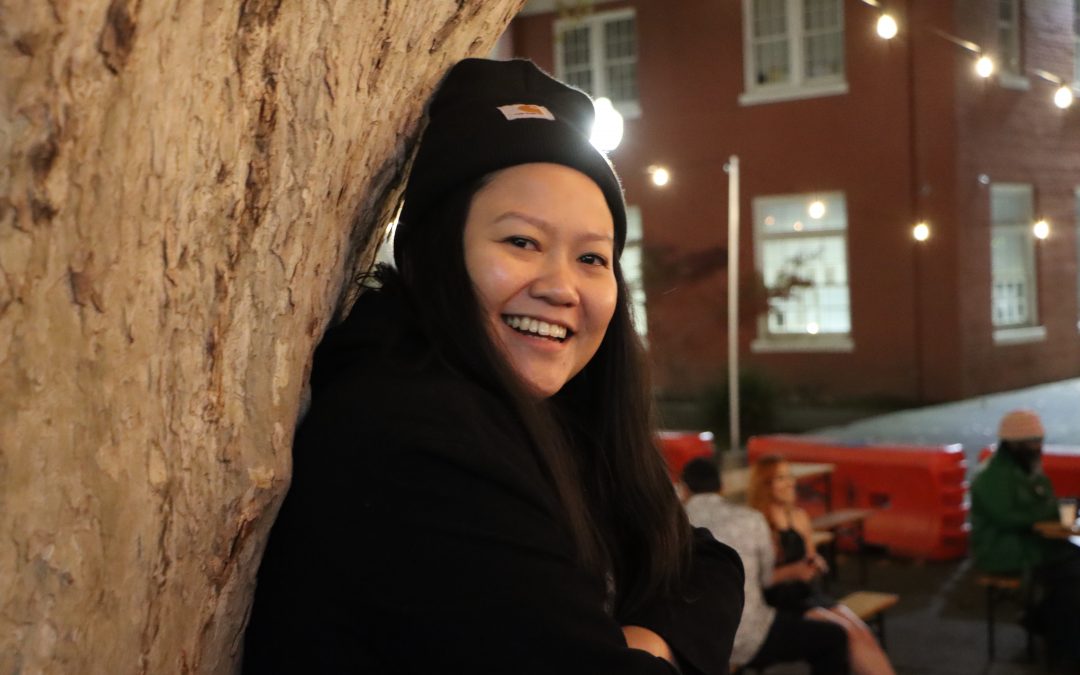 Justine Lopez represents the next generation of Sacramento Comedy Spot. She is a cast member on Lady Business, Anti-Cooperation League, and The Friday Show, and recently formed rap improv group called Masters of Rap Improv (MRI). In January, Justine began teaching Improv 101 Classes; she was also Diversity and Inclusion Coordinator for the Sacramento Comedy Spot.

I really enjoyed writing the piece on Justine. I have seen her grow through every improv class, and now I have the honor of performing with her in Anti-Cooperation League and The Friday Show. As her Improv 101 instructor, I knew from the very beginning that Justine was something special. I got to learn so much more about her during the interview for this story.

If you’ve ever seen Justine on stage, you know that she is the perfect blend of smart play, characters, and physical comedy. In a recent Friday Show sketch, she played Tiffany Twist, a David Garibaldi-esque performance artist who creates balloon animals set to dance music. That sketch is a stellar example of what Justine does best: she has a knack of taking even the most simple premise and making downright hilarious.

Justine says that she “knew in elementary school” that she wanted to do comedy. “I was always the class clown. I was always the funny weird kid. And I always remember coming to school and having something to tell my friends. It was kind of a little monologue.”

Justine was also influenced by her parents, who she described as “weird and goofy”. Her family used to play Whose Line is it Anyway? games together. Her dad and uncle were both clowns for a time. Justine says her uncle was “the funniest one in the family. He knew how do do magic tricks and performed at parties.” Justine grew up watching Saturday Night Live, a lot of sitcoms like Three’s Company, and comedy shows like Whose Line is It Anyway? She lists Amy Poehler and Robin Williams as some of her early comedy influences.

“I think I knew I was really into improv,” she says, “when I took a speech class in high school and we used to do impromptu speeches.”  Afterward, students told Justine she should have her own talk show or podcast. At the time, Justine was playing sports, including golf and tennis, and never took theater in high school.

Justine was a student at Cosumnes River College (CRC), where she started off with a focus in graphic design but quickly realized her heart was in the theater. Her first play was a series of comedy vignettes called This is Not What I Ordered, where she had to have an orgasm on stage. “My grandma saw that show and it was really weird. But I really committed,” she says with a laugh. “I think that’s also the reason I love comedy so much. I love hearing that laughter.”

Her first improv group, Home IMPROVment, formed while Justine was a student at CRC and performed at Beatnik Books in downtown Roseville. It was a short-form improv group formed by Mickey Medlicott, comprised of CRC theater students, including Ryan King, who Justine currently performs with in Anti-Cooperation League. Mickey Medlicott is now one-half of the popular two-man musical group Are They Brothers. Out of all the cast members on Home IMPROVment, only Justine and Ryan still do improv.

Her time with Home IMPROVment is when Justine decided she wanted to do more comedy, and was when she found the Comedy Spot. She stumbled across the Comedy Spot while searching online for internships with theaters and applied for a volunteer position with us. At the time, all of the box office volunteer positions were full, but she wanted to get involved so bad, she reapplied until a space opened up in the fall of 2015. Even though she was a volunteer, she didn’t take her first improv class until the summer of 2015 because she was still in theater productions at CRC. During that time, she was able to watch shows like Lady Business and Anti-Cooperation League while volunteering, and she says “I was always looking at your guys [cast members] and being like, ‘I want to do that.’” Her favorite performers at the time were Molly Doan and Mel Gelbart, cast members in ACL and Lady Business. “They were super into characters and would go for it.” Justine would eventually perform with Mel Gelbart, who describes Justine onstage as “energetic, supportive, intelligent, and hilarious”. Mel continued, “She’s a good friend; she’s truly kind and supportive, she listens and hears, and is honest and real.”

Justine started teaching Improv 101 in January. She says teaching her first improv class was “the best thing ever. I think one of the things that stuck with me was saying something, and then students would write stuff down. Anything I would say, they would write it down. I have to be careful. Every time I come out of that class it feels really good.”

While performing and teaching at the Comedy Spot, Justine also balances a family life. She has a nine-month-old daughter, Silvia, with Marc Ward, who she met during her first theater class at CRC. “Silvia is amazing. It’s amazing.” Justine says, “[Marc] He signed on to that class to meet girls; and he did.” Justine and Marc were acting partners in class and have been together ever since. “He is my mellow. I’ll do crazy shit on stage but when I come home it’s nice and calm. It’s a nice little balance that I have.”

Justine’s next goal is to promote promote diversity at the Comedy Spot, which is why she took on the added responsibility of being Sacramento Comedy Foundation’s Diversity and Inclusion Coordinator. “I am looking forward to seeing the Comedy Spot evolve and see every single color, race, and ethnicity represented.

I asked Justine if she has plans to move to Los Angeles. “I hate L.A. But if I ever decided to leave, I would go to the East Coast; New York or Chicago.”

You can’t write a story about Justine unless you ask her about her signature Late Show hat she wears during classes and some shows. “I got it at Goodwill on Florin Road and it was a brand new hat, and the moment I put it on it just fit right. I don’t know why it became a thing. Maybe it’s a safety net, but when I have it on, I am in the zone.” The day I asked Justine to be on a Helix Team, her first team at the Comedy Spot, Justine bought a pair of white Converse that she still wears during every single show. Her other pre-show rituals include having a beer, black coffee, or an energy drink, and stretching. “I always stretch backstage. Lots of stretching.”

I asked Justine what she would tell somebody who is interested in doing improv. “Do it. It’s fun. It takes you out of yourself. I would be a way more depressed person. If I’m sad and I come here [Comedy Spot], there is an instant relief.” I also asked what she would say to someone about failing. “Do it. Fucking fail. It only makes you better.”