How Improv Changed My Life 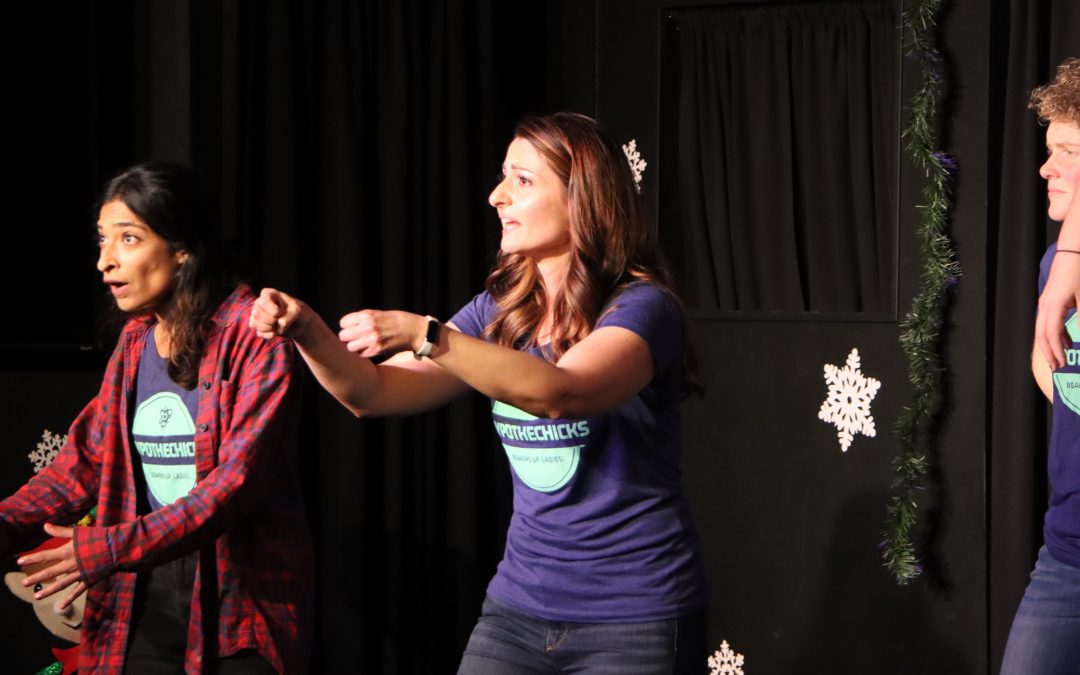 When I think about the happiest moments in my life, my thoughts immediately return to the night our fledgling improv troupe, the HypotheChicks, won our first Cage Match in October 2019. It seems like such a silly accomplishment to bestow the title of “Sara’s Happiest Moments”, but the significance and series of events that led up to that victory is one of my most heart-wrenching and proudest achievements.

As early as my middle school years, I knew that I wanted to be two things: a doctor that took care of babies and a comedian. The path to medicine was clearer to me: my father is a surgeon, both of my brothers are doctors, and my mother is a nurse. It was in my genes and, thankfully, I found my calling and pursued it successfully. I am a pediatric intensive care physician, and as the names suggests, my job is intense and my profession is all-consuming. Early in my career, I was pushed to the point of burn out and a traumatic event at work caused me to develop PTSD. I had taken a 6-week medical leave in order to recover and regain my footing. My identity as a “good doctor” turned into an existential crisis as I considered leaving medicine altogether and was in complete despair. Ten months prior to the night of Cage Match, with the encouragement of my work friend, I entered my first Improv 101 class with excitement, nervousness, and fatigue that I felt in my bones. As I mended myself together, Improv 101 helped bring my inner child back into my life to help me heal. After the first few classes, something in me came alive, and I realized that being a professional and being a comedian could co-exist and thrive if I gave them both the space they deserved.

I was hooked. I took Improv 201 and 301 in quick succession, I went to Harold shows on Wednesday nights and fangirled hard for Lady Business and ACL. I made new friends with my classmates and seasoned performers, and I took whatever workshops were offered. After our 301 graduation, I knew this couldn’t be the end, and I organized a group chat with my classmates to keep the magic alive. A few of us met up with Justine Lopez and Betsaida LeBron for drinks after POC Improv Space and were posed with one question: what do you all have in common? Well, we love improv, we are smart and science-minded, and we embrace our nerdiness. After so many years of minimizing my talents, here we were being told to “play to the top of our intelligence” and it suddenly became so clear: we are smart, accomplished women who can also rock a joke. That night, six HypotheChicks were born.

So, we practiced, practiced, and practiced. It was awkward at times, hilarious ALL the time, and with each solo and coached session, we found out how we could blend the scientific method with the stage. I was so proud of our little crew of awesome nerds, and I knew that we would be successful. So, I did what any overachiever would do: we designed and created T-shirts. Because, let’s be honest, if you brand it, they will follow. Then, we submitted for our first Cage Match.

As the date loomed closer, we knew that we were as ready as we could ever be. Justine and Betsaida’s words of improv wisdom echoed in our ears. Our friendship and sisterhood grew stronger each week. We had the skills, we had the chemistry, we had the T-shirts, and now we just needed the stage. Remembering that night now, I recall the nerves. Just before we went on-stage, I panicked and turned to Betsaida and asked, “What if people don’t think we are funny? What if no cares about the scientific method? What if we bomb?” And with a calmness that is characteristically Betsaida, she said “Who cares? This audience is packed with people who are just happy to be here for you. To them, you’ve already won.” She was right. In the last 10 months, I had pulled myself back on my feet, regained my sense of identity and confidence, and created something beautifully unique with my friends. There was nothing to be lost.

Fortunately, we went first against the seasoned, champion team G4G. I would be hosting. My mouth was dry and my hands were shaking as we obsessively patted each other “I got your back” behind the curtains. We stepped out onto the stage. All of our people were in the audience, and I knew where my mom was sitting because she forgot to turn off her camera-light and was filming the whole show. I started to introduce the HypotheChicks, what we were about, and the magic began. And it really was magical. All six of us were right there, fully present, listening with our butts (a Brian-ism), and we freaking rocked it. Twenty minutes passed in what felt like seconds, and we were ending our segment with our “Beakers up, Ladies” toast. We ran back stage into the green room and all but screamed with excitement: we did it! Each of us had our own journey that brought us to the steps of the Sacramento Comedy Spot, and each of us had our own little voice urging us to keep going forward, trust your instincts, agree and build. We were elated. As we hugged and took pictures with big toothy smiles, we had already won the battles that had brought us to this group, to this place, to this moment.

When it came time for the audience to vote, we didn’t care what the result would be. Honestly, I don’t any of us expected to win against the formidable G4G. We were already so immensely proud of ourselves for having come this far at all. So, when Kevin Cooley announced we had won the Cage Match, it felt like an out of body experience. Not only did we think we were funny, but the audience did as well! In that moment, I remembered the broken version of myself who stepped into Improv 101 and the months that followed: how hard I worked through therapy, how that flicker inside me became a steady fire with each class, and how I found an amazing group of women who shared my vision and weird sense of humor. It was such a profoundly difficult time in my life, and not only had I overcome every obstacle that could have made me fail, I succeeded beyond my imagination. The amazing lesson from the journey that I carry with me every day is that strength lies within, but it’s a hell of a lot easier when you have a tribe that has each other’s backs.

P.S. The HypotheChicks concluded a five-week winning streak in Cage Match that fall and have become a part of the Sacramento Comedy Spot’s improv troupes. I credit the t-shirts for making it official.